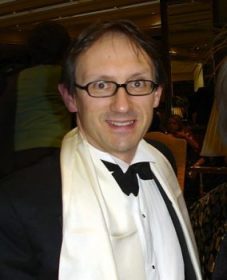 Born and bred in Dublin, Joseph O’Reilly has been playing piano since he was seven.

Born and bred in Dublin, Joseph O'Reilly has been playing piano since he was seven. Educated at Belvedere College S.J., Joseph is a graduate of University College Dublin and The Royal Irish Academy of Music. He holds a Higher Diploma in Education (Music). He spent seven years in London where he was a student of the renowned concert pianist Mark Schwartzentruber. He has taught piano since he was an undergraduate in UCD, and since 2002 has been resident piano teacher in Loreto College, St Stephen's Green, where he teaches both Junior and Senior School pupils.

As well as teaching, Joseph has played piano in many international Five-Star hotels, both in Ireland and abroad, and was resident pianist at the exclusive K Club Straffan, Co Kildare from 1999 to 2008. He has performed summer residencies in The Villa Seilern Hotel in Bad Ischl the famous Austrian town which was the location of the summer villa of the Hapsburg Imperial family. He also played for a summer semester at the world-famous Schloss Monchstein, in Salzburg.

He founded the Pembroke Piano School on Pembroke Road, Ballsbridge, in 2015.

Make an appointment or Enquire about Pembroke Piano